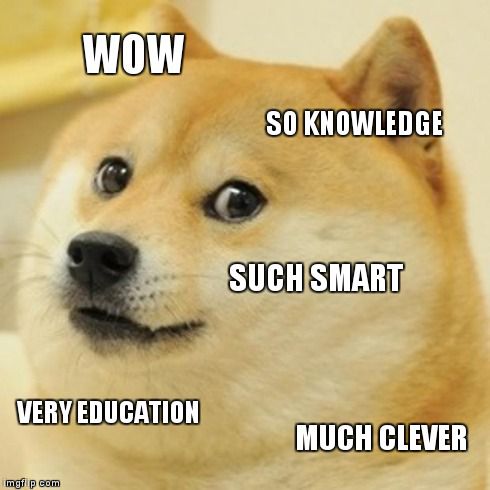 Did that featured image make sense to you?

If so, excellent. We can proceed with this piece.

If not, please read up on the doge meme.

And here I am assuming that everyone will be familiar with what a meme is. If you aren’t, honestly  I assure you of this article’s unsuitability. Can’t really dance before you learn to crawl.

That sorted, let’s get going.

What the woof is a meme coin?

Well, in its simplest form, it’s a cryptocurrency with the name and branding of a meme.

In a more complex form, it’s a cryptocurrency with the name and branding of a meme, created as a joke, an internet-culture movement, or even a pump-and-dump scheme.

It started with the creation of dogecoin.

Dogecoin was created as a bit of a joke about the wildly speculative side of the crypto market.  Ironically enough, it is worth about $85 billion today.

Dogecoin, as the name suggests was created with Doge, the extremely popular meme featuring a  Shibe Inu that had grammatically incorrect, but hilarious reactions to whatever situation was at hand. (See, I told you if you didn’t get memes, this would make scant sense.)

So in this post, I’m going to take you on a whirlwind tour of meme coin-land.  Let’s look at some meme-coins, how they started and where they are today.

Given that there are thousands of them, and most of the top ones are to do with dogs, I’ll pick up a couple of the top ones, and the others simply cuz their names stood out to me.

The OG. The big boi of meme-coins.

It was created in 2013 as a joke to mock the wild swings in the crypto market. So obvious was the joke that the name and brand were the basis of one of the most popular memes of that time. Doge.

I don’t think that Billy Markus and Jackson Palmer, the creators of this coin, had any ideas that  people take jokes this seriously.

Seriously enough, for Dogecoin to be worth $17.48B today.

And before you crack any jokes at its expense, each coin here is worth ten times the Indian Rupee.  Go figure.

Created by an anonymous person (or group) named “Ryoshi,” it is a token. i.e. it has no cap on the number of tokens issued.

Given that scarcity is one of the factors that drives crypto value, it’s quite a sight to see this coin gain so much value.

Some say it is a pump-and-dump set up with one particular wallet as a whale (holding billions in value), but two years down, no one is wiser on that.

How can we talk about meme coins and not have the mention of the lord, god, master of the crypto world, the supreme troll, the maker of everything from rockets to flame-throwers, the father of a kid with code for a name, Elon Musk?

A team of fanboys (and maybe girls) created Dogelon Mars in 2021 as the, wait for it,  “interplanetary currency used by space colonizers”.

I swear I am not making it up.

Currently heading in the opposite direction as the rockets mars, but who is to tell?

Shut up and read this: “Banano is a feeless, instant, rich in potassium cryptocurrency powered by  DAG technology disrupting the meme economy.”

I agree that our education system doesn’t prepare us for the future. But nowhere does it hold truer than for a person with a degree in finance.

To have a currency be described as “rich in potassium”. Imagine the internal screaming. No wonder most hate crypto. It’s banano out there.

This is getting more ridiculous than the plot in a Naughty America production.

Beyond the current $6.5M cap, this coin’s big achievement is creating a sex playlist on Spotify. It’s  29 songs long and is available here: spoti.fi/3s4tC2X

Primarily built to pay for adult content, they hope to provide the necessary thrust by serving subscription-based 18+ content on their platform that will be paid for through CUMMIES.

No. I never imagined I’d write that sentence either.

There there, you went through a fruit coin and did not see this coming?

So, let me give you a little background. Reddit has a sub for garlic bread memes. r/ GarlicBreadMemes. It has 179k members.

And what happens when meme lords get passionate about something? As dogecoin might have indicated, they end up building a meme coin.

All said and done, I’d be very surprised if most of the holders of this coin weren’t in Transylvania.

The last one in is a loser!

As per the LOWB website, the two founders of it heard about bitcoin in 2017 and lost a shit ton of money trading it. They are two poor guys from China. One is a father of two kids from a village and the other, is a coder who works all day and is pretty miserable in life overall.

They claim to have put their life savings into this project and promise there will be no pump-and-dump situation with this coin.

The market cap of Loser Coin is $2.09M and is one of the rare tokens not trading in the red nowadays.

And that makes me suspicious. For what kind of loser behavior is that?

When I started writing this piece, I thought I’d heard most of it, if not all.

But I stand corrected.

Turns out, when it comes to the world of crypto, the more you dig, the more you find. And by the looks of it, I haven’t even scratched the surface.

So there’s much to learn, and much to share.

VeChain Confirms $1.2 Billion After Spending Just $4M on Expenses in The First Q1