What is Axie Infinity Shards?

The cryptocurrency is a governance token of the famous game Axie Infinity which is a blockchain based game. Players buy, swap and rear NFTs called Axie which can be traded or can be battled with other players in 3v3 mode.

Using this governance token, users can take part in decisions including how Treasury Funds are spent.

Currently the AXS token has a circulating market cap of $1.24 Billion which represents around 100 Million Tokens. The cryptocurrency is at 37% circulation which indicates that any minting activity can devaluate existing tokens’ price.

We have used two charts for the price analysis of AXS. The daily chart gives a broad view of the market and the 4 hour chart shows short term trends. Any  price movement is considered concrete only when both charts confirm. 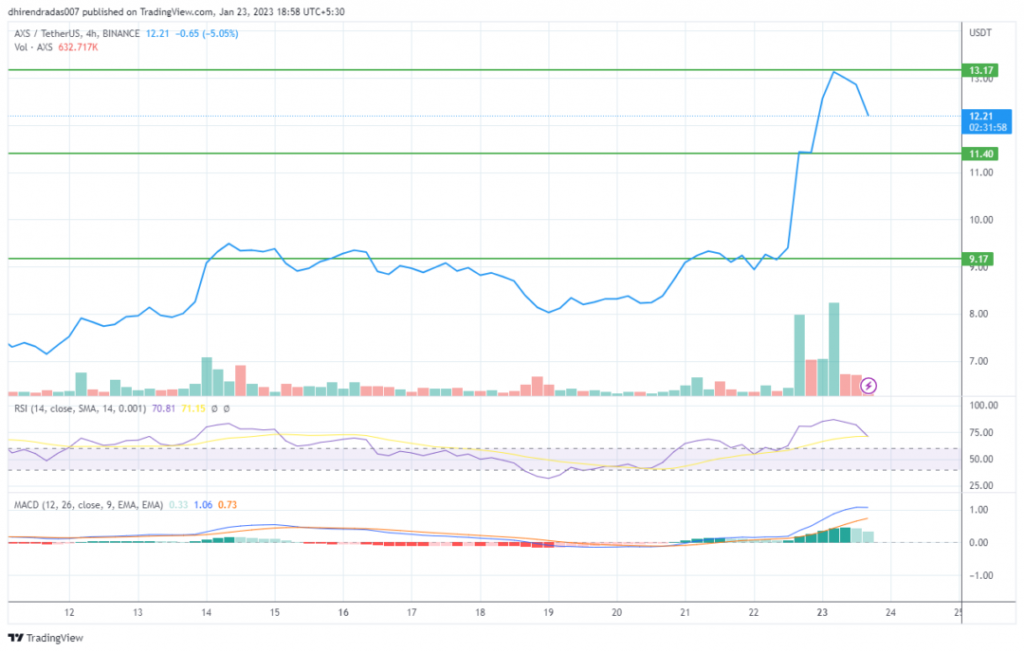 The four hour chart show that AXS price might have reached a short term maximum and the prices can fall from this levels($12.4).

The RSI has retraced from 87 but is still above 70. It shows that the crypto is still at overbought levels.

MACD also shows a move towards convergence which also indicates that the cryptocurrency might see a downward journey in the near short term.

The up move in AXS price started when the RSI crossed the mark of 40. The price ended a downward journey and took the support of $6 price levels. Since than it has moved to double and is continuing its upwards journey. However, the technical indicators are showing mixed signals.

RSI is showing an overbought signal which means that the cryptocurrency’s price might come down soon. But MACD shows no end of divergence (the orange and blue line) that there is still some upside left for the price.

If you trade using Futures and Options, you can take a trade towards downside and short the cryptocurrency with the following stoploss and target. You can also take a leveraged trade depending upon your risk appetite.

The likeliness of the first target is greater than that of the second. However, these targets are only valid till there is no news or any fundamental shift.