According to Bloomberg Intelligence analyst Mike McGlone, the top two cryptocurrencies (BTC and ETH) by market cap are expected to lead after recent price dips affected asset classes across the board.

In a recent interview, McGlone said that he believes the Federal Reserve’s interest rate hikes will be more detrimental to long-term US stock market growth than proven digital assets like Bitcoin and Ethereum.

McGlone said if the stock market continues going down, which is likely because of the Fed intervention and inflation reduction efforts, Bitcoin and Ethereum will also suffer, but they will still come out ahead.

The volatility of these crypto-assets, most notably Bitcoin, has continued to decline versus stock markets. Just like how Amazon experienced a decrease in volatility when it first came out. Bitcoin is doing pretty much the same thing right now, which could be good news for investors who want their investments to go up instead of down!”

McGlone says cryptocurrencies are the next big thing that’s going to change our lives for generations,  just like Amazon and other 2000s-2010’s market innovators.

“Investors are looking forward to the future – do you really want to miss out on this revolution?That’s what I see happening. A little bit of selling offers in the stock market and bids below in things like Bitcoin and Ethereum.”

Bitcoin is currently up from its weekly lows under $27,000 after dropping to a value of over 36 thousand dollars this past week. It’s currently in the green by nearly 5% and priced at $30,296. 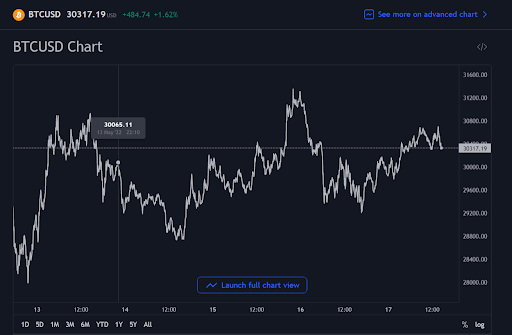 It is true that despite Bitcoin losing its $30,000 price point, it’s not the only asset class in decline. Most major assets are seeing similar trends these days, with many dropping below their previous year’s prices.

The market finally got a taste of its own medicine as the S&P 500 dropped below 4,000 for what seemed like an eternity before finding some footing again.

For the first time in about two years, both Bitcoin and US stocks reached their 100-week moving averages.

“The asset that went up the most over the past five, ten years is going to come back as the Fed hammers the punch bowl… It’s more likely to come out ahead,” he said

Ethereum has experienced a remarkable recovery, rising above $2k after falling to $1,824 on Wednesday. 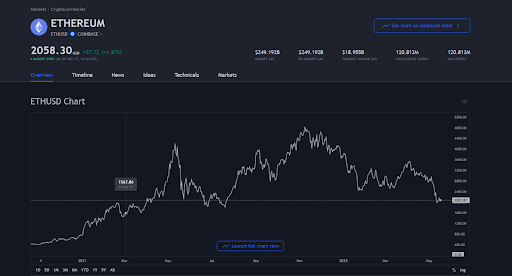 Related Topics:BitcoinBTCethEthereumMike McGlone
Up Next

Here are the Top Ten Cryptocurrencies With Largest Twitter Following