The price of Bitcoin has corrected itself somewhat from its November slump and has been hovering around a few key support levels. Speculation about the direction and behavior of BTC has been wild through the month, as everyone wonders if Bitcoin is ready for recovery or if the reds of the 2022 bear market have only just begun.

November is on its way to being over, and the crypto community has expressed concern about Bitcoin’s ability to end the month above the $16,000 support.

However, the short- to medium-term outlook on Bitcoin looks grim from most standpoints.

All eyes are on the Bitcoin HODLer, whale accumulation rate, its miners, the decline in the mining hashrate, and its volatility as November ends.

In this article, we cover three things you need to know about Bitcoin in the last week of November, how its price may be faring and what December may hold for the flagship cryptocurrency.

1) Bitcoin’s Volatility as November Runs Out

Despite still being at a two-year low, on Bitcoin’s charts, we can see that the last weekly candle closed on 27 November and ended the week around the $16,400 zone.

This weekly close was slightly higher than the previous week’s candle close around the $16,280 zone.

This lack of volatility in the price of Bitcoin has been a source of concern to traders and investors, leaving many cautious about the next steps they take.

Material Indicators, a blockchain analytics Twitter handle, mentioned last week that the holiday weekends were approaching and that everyone in the market should “Expect things to get interesting” before the weekly and monthly candles close.

#Bitcoin whales started buying shortly after yesterday's #TradFi close. It's a long holiday weekend so expect things to get interesting as we move towards the Weekly and Monthly close. #FireCharts pic.twitter.com/NfrAA5xekz

In another tweet this week, the Material Indicators handle mentioned that the 30 November monthly candle close would likely spark fresh volatility.

It can be said that November and June 2022 are easily the worst Month for Bitcoin since November 2018, as illustrated by the crypto data aggregation platform, CoinGlass.

As illustrated above, the price of Bitcoin dropped -37.28% from its price at the start of the month in July and has dropped by -21% from the start of November at the time of writing.

2) Bitcoin Miners Are Now Due for “Capitulation”

Hash ribbons are a special kind of Indicator. For the unfamiliar, Hash Ribbons measures whether the miners have “capitulated.” When the costs of mining outweigh the mining rewards, these miners give up (or capitulate).

Bitcoin, as many knows, is in a squeeze, and at the rate, the cryptocurrency continues to crash, it is only a matter of time before the average miner gives up.

The hash ribbons on Bitcoin are starting to warn of an impending miner capitulation, according to Kripto Mevismi, a CryptoQuant analyst.

According to Mevismi, because mining bitcoin is becoming so difficult, costs will rise, and doing business in this environment will become more challenging.

For this reason, Mevismi says, miners don’t always “work in full force.” If they have effective, modern mining equipment, they use it, but that is all. People feel the effects of rising living expenses due to increased inflation, a falling bitcoin price, and increasing mining costs and difficulties. In all, the environment for miners is difficult.

3) Bitcoin HODLers Are Starting to Accumulate

The rate at which investors start to HODL bitcoin is raising concerns about a potential supply squeeze.

This is a good thing because, according to the relationship between supply, demand, and price, the less of a commodity available, the more the demand. And if demand goes up, then so does the price.

According to a tweet from GlassNode, the numbers of shrimps and their accumulation rates are spiking.

This cohort now now hold over 1.21M $BTC, equivalent to 6.3% of the circulating supply.

Since FTX fell, shrimps (holding less than 1 $BTC)  have increased their holdings by 96.2k $BTC, an all-time high.

This group of Bitcoin HODLers currently holds more than 1.21 million bitcoins, or 6.3% of the total supply in circulation.

The Crabs, on the other hand (holding up to 10 BTC), in the past 30 days, have experienced a ferocious balance increase of 191.6k $BTC. 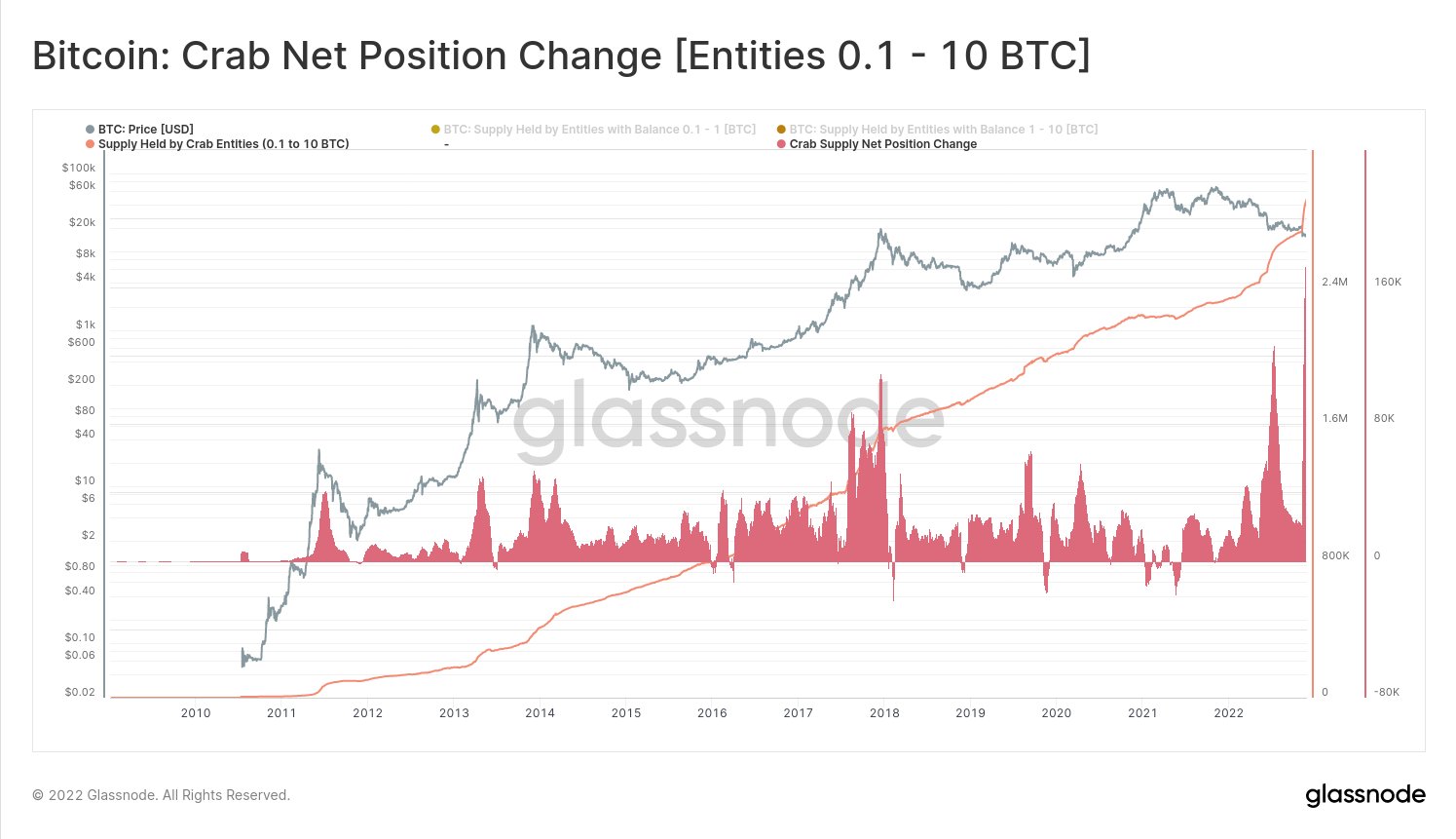 This new Crab holding rate surpasses the peak of 126k $BTC/month in July 2022 and is now at an all-time high.

Since its crash following the FTX scandal, Bitcoin has been trading in a narrow range around the $15,000 to the $16,600 zones. Overall, fear, uncertainty, and doubt continue to run wild about cryptocurrency’s short, medium, and even long-term future.

Several bearish predictions have peppered the market, with some analysts speculating that the flagship cryptocurrency may go as low as $15,000 before the year runs out.

However, over the past week and at the time of writing, Bitcoin has consolidated between the $15,588 and $17,622 zones. According to a bullish divergence in the cryptocurrency’s relative strength index (RSI), the bears may now be tired of pushing the price lower. For now, at least.

If the bulls finally succeed in causing a rally to the upside, the area between the 50-day simple moving average (purple line) around the $17,000 zone and $17,622 may prove to be a tough line to cross. What seems likely is that the cryptocurrency may range between these two points before any movement to the upside or downside.

However, if the bulls successfully launch a rally and push the price of Bitcoin above $17,622, the next resistance level would be around the $18,600 zone or the 20-day exponential moving average (red line).

And if the bulls succeed again in breaking this zone, nothing stops Bitcoin from rallying for a retest of the $20,000 zone.