Bitcoin has made a bearish engulfing candlestick structure on May 18th. The Fibonacci extension tool pasted on the chart shows the Bitcoin’s got some negative boot space for a step down towards $25,000.

While there is no near-horizontal support present near the current price situation, the low wicks from the price crash on May 11 and 12 could be used as a near-term support range.

In the 2H timeframe, Bitcoin has broken down from an ascending channel on May 18th which was confirmed by the RSI breakdown as well.

Despite the price breakdown, it can be seen that the price is still trading under a descending wedge pattern which is a bullish pattern. (Chart Below) 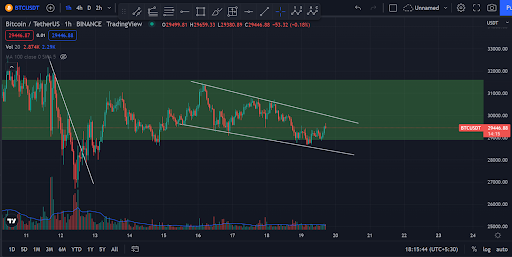 In the hindsight, a sliver of bearish engulfing for Bitcoin could be a part of yesterday’s gloomy day on Wall Street.

Other events like Tesla’s fallout from S&P 500 also add to the already playing out the bearish trajectory of the BTC/USD pair while it remains below $30,000.

The bitcoin pair has fallen off in part impact of United States Equities, with S&P 500 in focus with its largest intraday decline since June 2020.

Also, the controversy from Tesla being removed from the index has fueled the poor performance. Tesla’s CEO, Elon Musk has reproached those behind the ESG decisions and quoted in a tweet, “ESG is a scam. Phony social justice warriors have weaponized it.”

Even the founder and CEO of the investment firm ARK Invest, has called the decision of not including Tesla “ridiculous” and “not worthy of any response”. 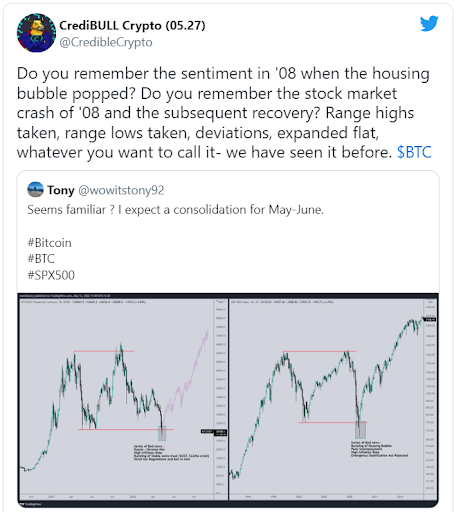 Can Bitcoin form another low?

Going back to shorter time frames, the theory remains pinned towards potential moves above $30,000 post which a deeper correction can set in.

“Probably some momentum towards $29.7K possible. Question whether we can hold $29.3K for continuation, but overall I’m still expecting a higher low to be happening on Bitcoin in which we continue towards $32.8K/$34K” was told by popular crypto trader Michael Van De Poppe on Twitter last night.

Advertisement
Related Topics:BearishBitcoinESGInvestTesla
Up Next