The cryptocurrency market continued to fall on June 2, with major coins trading at considerable discounts. The global capitalization dropped by 5.78% to $1.24 trillion, and total volume over 24 hours decreased by 12.10% to $97.43 billion. 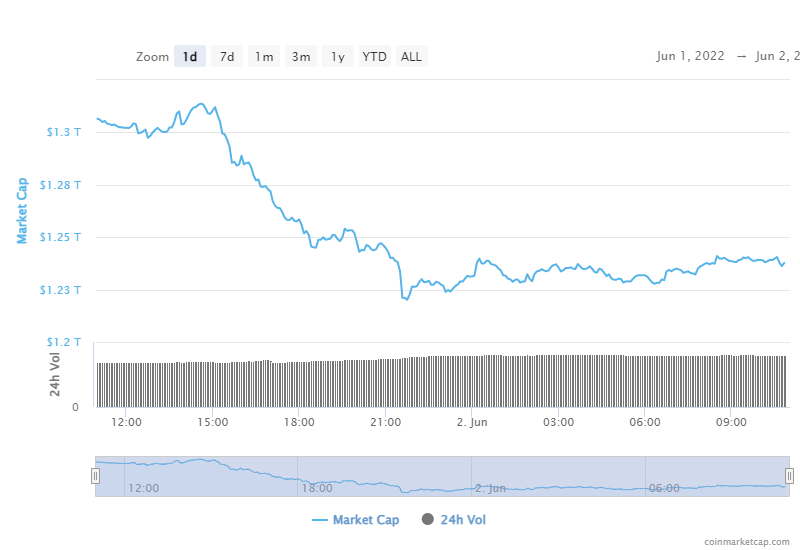 Bitcoin remains in a symmetrical triangle pattern, with both bulls and bears fighting for market control. The symmetrical triangle is usually followed by a move in either direction, but it’s difficult to predict which way the price will go until after breaking out of this pattern. 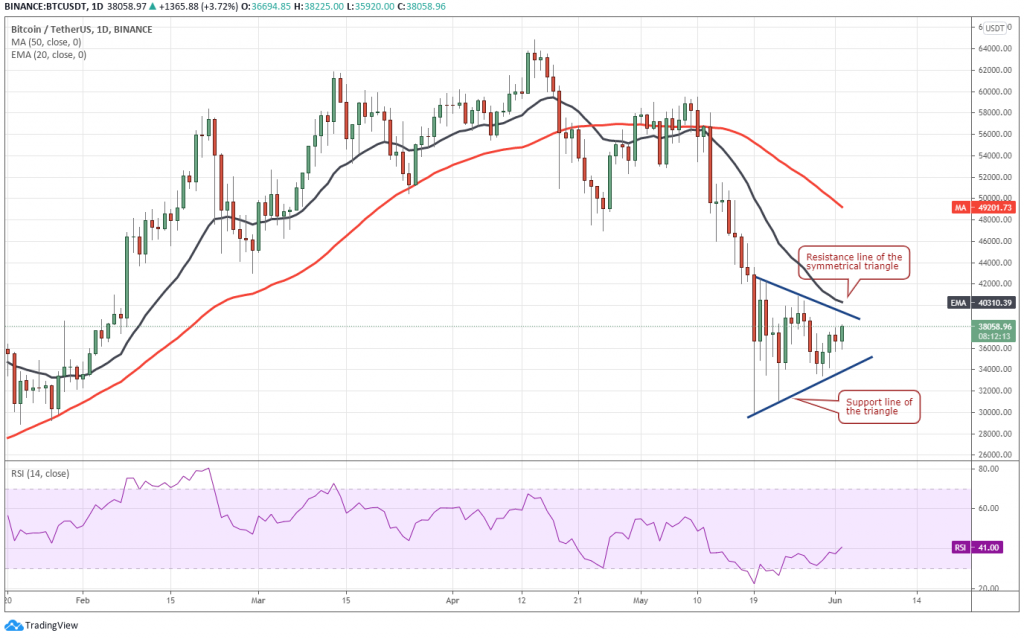 The latest developments in the markets show bears are on top. The down-sloping and relative strength index (RSI) confirm negative readings suggesting they’ll continue dominating for now at least. If BTC/USDT breaks below a triangle, the bearish momentum could increase. The minor support at $28,000 is not enough to keep the price from retesting its lows.

The price has been trading inside a triangle formation for some time now. If the bulls can push and sustain it above their resistance line, then that means bulls have overpowered the bears. The pair could then attempt a rally back towards the 50-day simple moving average ($49,201).

The level may again act as a stiff resistance, but if the bulls propel prices above it, we can likely expect that downtrend to be over.

Ether (ETH) has been trading near the 20-day exponential moving average for most of May, but it dropped slightly on June 1st. All hope is not lost as it seems the bulls didn’t allow for much loss before picking up. That’s mainly because buyers weren’t eager to close out their positions. 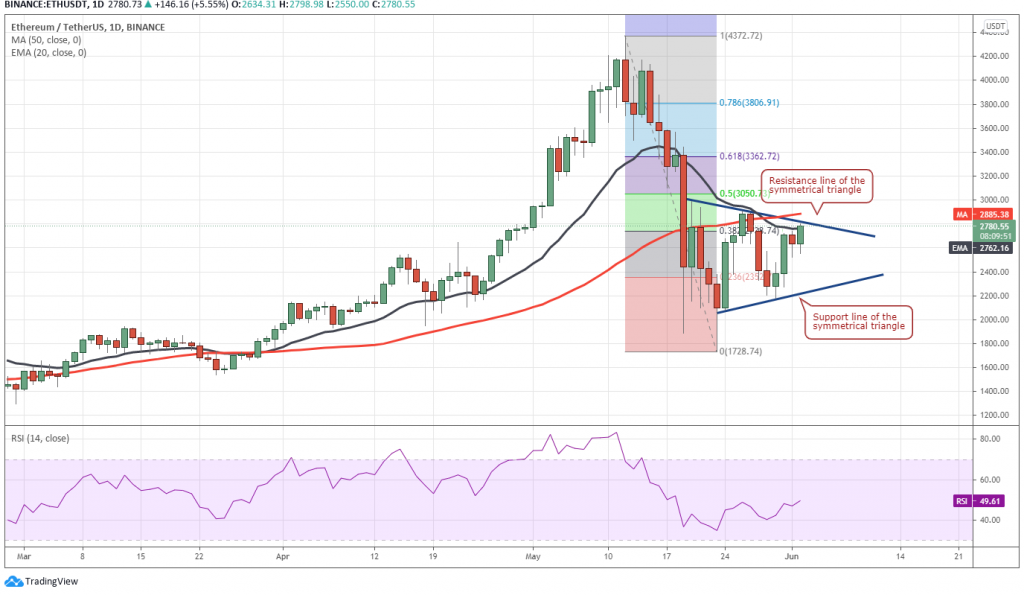 The 20-day EMA is flattening out, which reduces the selling pressure. The RSI rose near to midpoint, indicating stability in this market trend; however, it’s important not to get caught up on one chart but rather watch multiple charts at once to see how things may play out before making any final decision about investing or trading.

But, if the bulls can’t sustain their momentum, the price might start consolidating inside the triangle for another few days. A movement below the triangle indicates the bears have the market.

Dogecoin continues its upward trajectory, breaking above the downtrend line on May 31 and clearing its 20-day EMA ($0.37) today. The RSI is flipping to positive territory, and the 20-day EMA has turned up,  indicating that the bulls may be making their way back into this market. 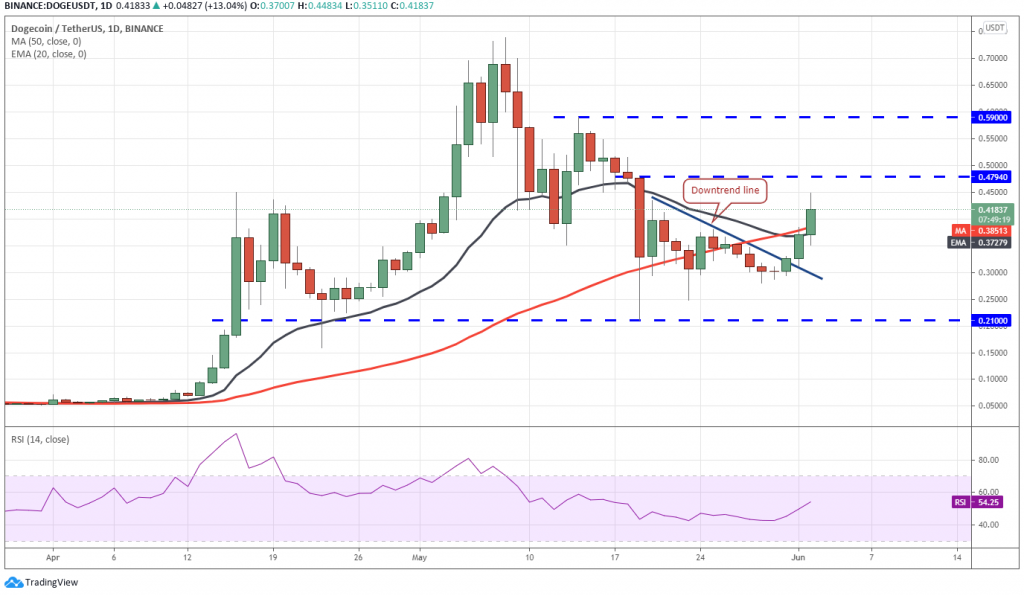 If the buyers continue to propel this price above $0.47, then DOGE/USDT could quickly rise another 10% and reach as high as $0.59.

In another scenario, if the price turns down from $0.47, it could go back towards a 20-day EMA. If the supports hold, this could signify that the sentiment has finally turned upwards, and traders are starting to buy coins on dips. The bulls will then make one more attempt to push the price above $0.47.

But if the price goes below the 20-day EMA, this is a clear indication that DOGE/USDT will continue to drop. It might even fall as far as $0.21.

The last year has seen WEMIX Token perform best with a gain of 1,242%. The coin that performed the most in 2022 is the Green Metaverse token which rose 677% since January first. The worst performing coin last year is Terra Classic, which lost 100.00% of its value since January, making it one of crypto’s most significant disasters.