It is likely that the Securities and Exchange Commission has launched an investigation into what happened to UST over this past week. Two former SEC attorneys told The Block, “It’s definitely something they’re looking at.”

The Collapse of UST

There is no doubt that the collapse of the stablecoin USD Terra (UST) is one of the most talked-about stories this week in the crypto space. UST, which is supposed to maintain parity with the US dollar, has been struggling to keep its price stable, falling well below its expected $1 level this week. 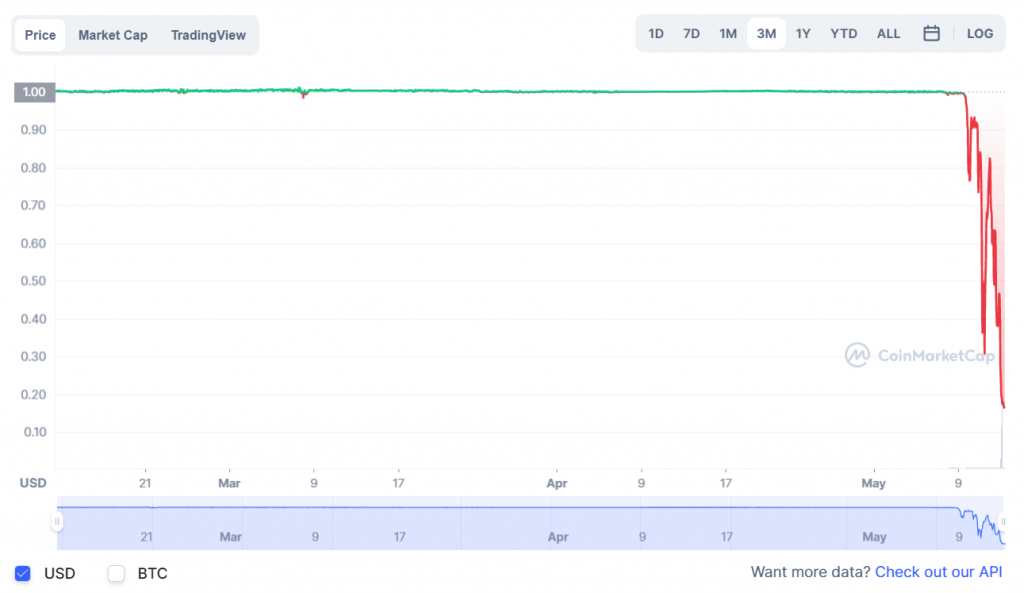 Although the Terra community and the organizations that support this ecosystem have led various efforts to rescue the asset and relink it, the movements so far seem insufficient since UST remains trading for pennies on the dollar, at $0.6 at the time of publication.

The incident has been especially conspicuous due to the size of UST, which is the largest decentralized stablecoin by market capitalization. Unlike other stable assets, UST is not guaranteed by dollar reserves. Instead, it relies on a burn and mint mechanism tied to LUNA, Terra’s native token, to maintain its peg.

In addition to this mechanism, Terra has been acquiring large sums of Bitcoin and other cryptocurrencies to support its stablecoin. The project’s BTC reserves reached $3.5 billion a few weeks ago before the recent collapse of UST prompted Terra to deploy some of those funds as a way to redeploy capital and save the market from UST and LUNA.

Kwon on Wednesday shared a new plan to bail out UST and return it to dollar parity. This is a community proposal that seeks to increase the LUNA mintage limit.

“It’s clear that the SEC is already on the scene as it investigates Mirror Protocol,” said Philip Moustakis.

According to the SEC spokesperson: The SEC doesn’t comment on the existence or non-existence of any possible investigation. They also declined to answer questions about TerraUSD

The status of stablecoins within the US regulatory framework is still being debated, even though many experts believe authorities will accept them. Kwon himself wrote on Twitter back in April:

Algorithmic stablecoins are fast becoming the norm – protocol-issued dollars coming to every blockchain.

Detractors cannot see – currencies are ultimately backed by the economies that use them, and the future is clearly opting to use decentralized and self sovereign stablecoin💰

But that gets complicated, according to Moustakis.

Moustakis explained that even though there is some question as to whether UST falls under federal securities laws, “the stablecoin’s design may have escaped” this purview – but transactions made with these coins later could bring them back into compliance.

Additionally, a stablecoin that loses its stability may very well lose all of the claims it has made about not relying on expectations from third parties. In other words: evolving facts and circumstances surrounding an asset can change anything depending upon how SEC treats them as securities!

The Anchor Protocol’s promise of 20% return on staked UST, as well the Luna Foundation’s efforts to inject new capital and preserve this ankles integrity make it clear why this has to be resolved as fast as possible.

Beyond the question of whether stablecoins are securities, there’s also this nagging issue with how much international influence the Securities Exchange Commission has.

In September 2021, Kwon made a name for himself by challenging the SEC’s right to regulate it. He lost his case in February and he was hoping that this would give them further insight on how they should go about investigating Terraform Labs’s activities.

After denying being served at all, Kwon said “It’s fascinating talking to Americans that they’re sort of obsessed with American politics and regulatory matters. In other parts of the world, people may have different priorities or else pay attention”

Despite these claims, the mirror protocol allowed the trading of synthesized or “mirror” versions of US stocks such as Tesla and Apple in exchange for Terra blockchain-based USDT.

Kwon’s attorneys tried to argue that “the court does not have jurisdiction over Mr.Kwon because he is not a resident and has no case related to contact with the United States.” This argument, however, did not hold up in December 2018.

This is not DR Kwon’s failed stablecoin project. He was also the brain behind Basis cash.

Advertisement
Related Topics:SECStablecoinUST
Up Next