On a Tweet thread yesterday, Jurrien Timmer – Dr. of Global Macro, posted some charts depicting a few ratios as good metrics for identifying the accurate picture of Bitcoin.

The first is the Bitcoin/Gold Ratio – a ratio that acts as a barometer for measuring bitcoin as a store of value compared to the “original” store of value, that is, Gold.

The Bitcoin/Gold Ratio is sitting on significant support compared to the 2017 highs and 2021 lows. Also, the metric of detrended Bollinger Bands shows that the ratio is now at two standard deviations under the trend – a level that has absorbed the last three declines. 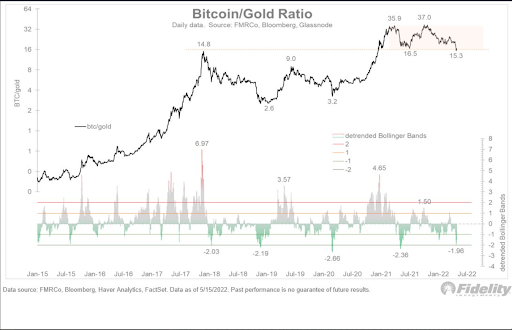 Following the Bitcoin/Gold Indicator is Dormancy Flow – this indicator gives a timeline to the number of days a coin has spent staying dormant before it was moved.

Dormancy considers the total volume of coin-days destroyed and divides it by the total coin volume transacted to give an average spent lifespan on a per unit coin basis.

Or to simply say, it is a measure of weak hands vs strong hands. This indicator is pulled from the ‘Entity adjusted dormancy flow’ chart from glassnode. As the chart suggests, the indicator is now at the lowest level since the 2014 and 2018 lows.

The next up metric on the line is Valuation. With the current fall down of Bitcoin to $25,000, the asset’s price is currently below the suggested levels of mobile-phone-based S-curve and the more conservative internet adoption model. 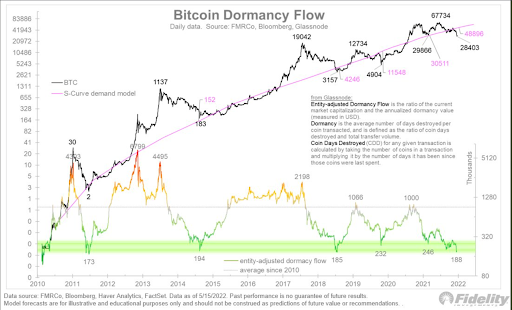 As purported from an article on the glassnode academy:

Long Term Holders keep possession of their coins for several months to years. A supposed estimate is considered to be 155 days period after which the coins are considered to be unlikely to be spent

Short Term Holders are generally the category of market traders, new entrants, or “weak hands” that exit the market based on the ups and downs in the market volatility. Reserves of coins generally less than 155 days are more likely to be re-spent and are considered the liquid and active portion of the supply. 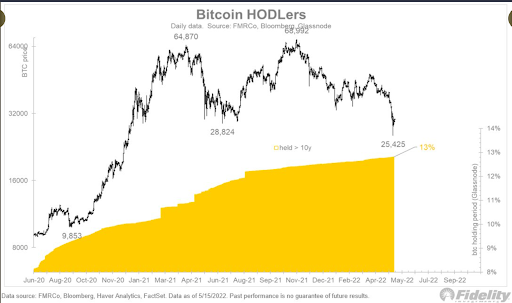 Talking about Long Term Holders, the percentage is steady at 13% of the supply for the holders possessing the coins greater than ten years.

Is NFT Trading Halal? The Islamic Perspective on Non-Fungible Tokens